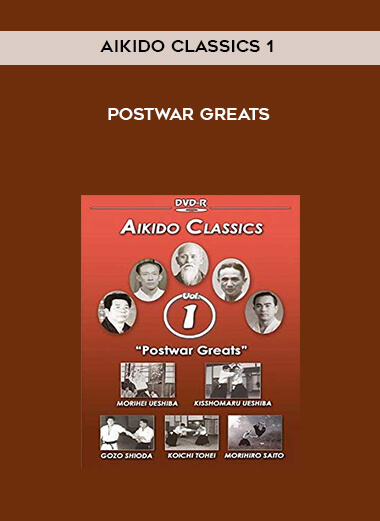 This DVD is a collection of precious historical films featuring aikido’s most famous figures. These are the teachers most responsible for the broad success of aikido following World War II. Beginning with the unbelievable art of Aikido Founder Morihei Ueshiba, each of these teachers developed his own unique approach and technical style and inspired legions of enthusiasts. The footage contained in this wonderful DVD represents some of the highest levels of aikido yet seen.

Gozo Shioda: The founder of Yoshinkan Aikido gives an unforgettable demonstration for a film documentary shot in 1958. The top names of the early years of the Yoshinkan also appear. Full of fast-paced action!

Koichi Tohei: A class and demonstration by the then Chief Instructor of the Aikikai Hombu Dojo for a team of American filmmakers in 1962. Tohei Sensei leads the class in “ki” exercises followed by an outstanding exhibition of free-style and randori techniques. This is Koichi Tohei at his best!

Kisshomaru Ueshiba: The late Doshu’s technique is noted for its soft, circular movements, and numerous Aikikai shihan have been influenced by his approach. He is seen here conducting a class and also demonstrates graceful free-style and multiple-attack techniques.

Morihiro Saito: This is the famous NHK film documentary shot on location in Iwama in 1973. Saito Sensei was the Chief Instructor of the Iwama Dojo and Guardian of the Aiki Shrine from 1969 until his passing in 2002. The power and precision of the art of Saito Sensei is captured on film in vivid detail.